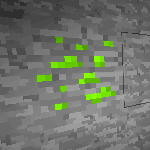 Uranium is a metal resource added by IC² and generated as ore between layers 0 and 64, usually in groups of up to 2 blocks. It requires an iron pickaxe or better to mine.

Several forms of uranium are radioactive and will poison (often quite severely) anyone handling them without the use of a Hazmat Suit.

These forms of uranium are seen during ore processing:

Uranium is not used in metal shaping, but has the following additional forms:

These additional forms are mostly for compact/compressed storage, and have no crafting use. Well, not 'crafting' per se...

Uranium's primary use is the crafting of nuclear fuel (to turn into fuel rods).

Apart from that it's not particularly useful, apart from decorating your house with the blocks.

Or perhaps throwing it at other players with inventory space and watching them die of radiation poisoning.

Uranium is expensive stuff, though! You wouldn't waste it on something like that, would you? I mean, not more than once or twice or twenty times...