From Industrial-Craft-Wiki
Revision as of 15:47, 22 April 2015 by Andrewminer (talk | contribs)
(diff) ← Older revision | Latest revision (diff) | Newer revision → (diff)
Jump to navigation Jump to search
Experimental-Only Content: This information has been updated to the V2.X version of IC².
The most recent version of IC² is V2.8.222.

Uranium can be obtained by mining Uranium Ore. It can be crushed, washed and centrifuged to create Uranium-235 and Uranium-238, which can be further used in nuclear engineering. Most forms of Uranium are radioactive, so in order to safely interact with it you must wear a HAZMAT Suit. A notable exception is the Uranium-238 Block. Uranium is also one of the few resources which cannot be Replicated.

Uranium naturally generates in the overworld as Uranium Ore. To mine Uranium Ore you need at least an Iron Pickaxe. It is found between layers 0 and 64, usually in groups of up to 2 blocks.

To use Uranium in nuclear fission, we need to increase the concentration of the fissile Uranium-235. Unfortunately, the only way to do this is to separate the Uranium-235 from the more common (but less useful) Uranium-238. Exposing natural Uranium to the high powered lasers in a Thermal Centrifuge should do the trick; however, this will require the ore to be crushed and preferably cleaned.

Uranium-235 is the more useful part of Uranium ore, however, it only accounts for 2.7-4.25% of natural Minecraftian Uranium (in real life, only about 0.72%). This is the part which sustains the fission chain reaction; it is highly radioactive. Uranium-235, in sufficient quantity, can sustain fission even when being enriched with the common and non-fissile Uranium-238. The result is an even more useful beta-decayed Uranium-238, also known as Plutonium-239.

Uranium-238 is the most common isotope of Uranium. Uranium-238 alone cannot sustain a nuclear fission chain reaction, which is why it is enriched with Uranium-235. 95.75-97.3% of natural Minecraftian Uranium consists of Uranium-238. The isotope itself is still radioactive, unless bundled into a large form. Our scientists still cannot explain this phenomenon, but there are a few HAYO-ish rumors involving tiny radioactive-eating bees... Don't ask me.

Our best scientists have come to the conclusion that the magic ratio is 3:54. So, to enrich the Uranium and prep it for Fuel Rods, put those isotopes together in this formation:

Now that you have Enriched Uranium Nuclear Fuel, use a Canning Machine to fill an Empty Fuel Rod. You should end up with a useable Uranium Fuel Rod, which can be placed directly inside the reactor. 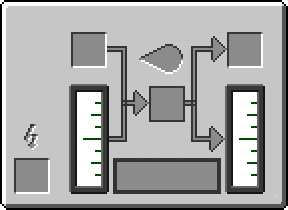