Difference between revisions of "Solar Panel"

Solar Panels are generators that utilize the energy of the Sun to generate EU. This fact means that they cannot work underground (unless there is an unobstructed view of the sky), in the Nether or the End. They also don't work at night.

The addition of electronic circuits in their latest design has done some strange things. Now that they have awareness, they have all decided (union rules, nothing we can do) that they won't work as hard if the weather is bad.

Solar Panels output power at a rate of 1 EU/t during daylight hours (from 6:20 to 17:45). Power will output to any side except the top. Inclement weather (i.e., storms) affects energy production.

Solar Panels can also be crafted into the Solar Helmet, which can automatically recharge whatever electronic chestplate you're wearing while in direct daylight! HAYO! 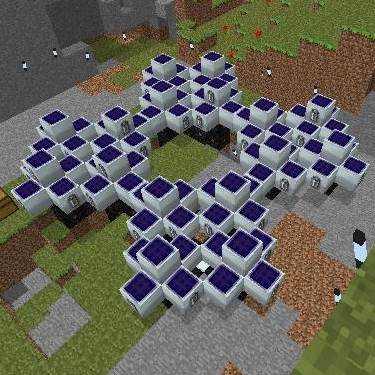 Due to the relative weakness of power generation, Solar Panels are often assembled into so-called Solar Flowers (when using Copper Cable), whereby as many Solar Panels as possible are connected to a BatBox using cable lengths of four segments or less. These constructions provide the benefit of compact and relatively cheap Solar Panel arrangements without energy losses. This was the most efficient design that existed in IC1 and earlier versions of IC2. The addition of Tin Cable, which allows micro currents to be carried 40 blocks, has made other arrangements equally feasible. Now, arrangements using a combination of tin and copper cables can provide superior efficiency, and don't require such intricate planning.

Interaction with other mods

The first row are glass panes, and the second row (excluding the middle) are Silicon Plates.

Ah, the technology of Future! Solar Panels are the futuristic and 100% clean alternative to gather energy. They don't even use any kind of fuel but the sun, seriously!

You can just place them somewhere in sunlight, put a battery in and be happy.

As fair salesmen, we feel responsible to tell you that charging up RE Batteries by Solar Panels may take some time. This is not because of the low efficiency of the Solar Panels, but because our RE Batteries are so frikkin' awesome, they just need a long time to charge. HAYO!